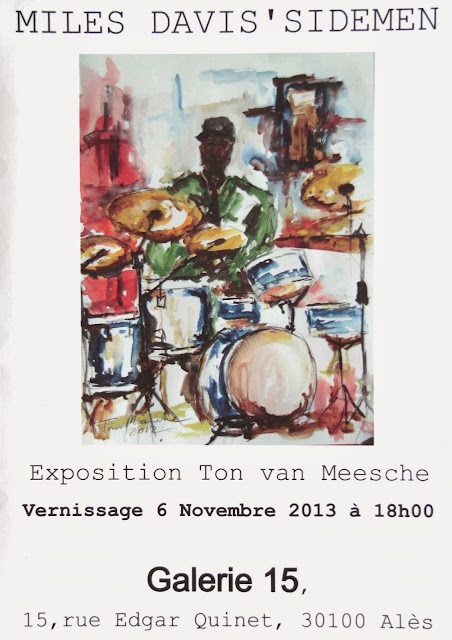 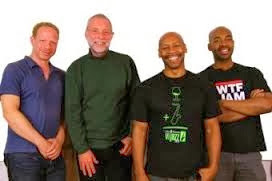 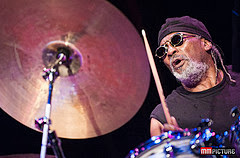 A sortable calendar of noteworthy cultural events in the New York region, selected by Times critics.
His death, from leukemia, was confirmed by his son Talkeye.
Mr. Jackson, whose distinctive look included long hair braided with rivets and subway tokens, had a muscular style that set him apart from his fellow avant-garde jazz drummers, providing for a thunderous yet economical rumble infused with funk, marching-band patterns and African styles. His band, the Decoding Society, showed his knack for writing rigorous yet approachable music.
He performed over the years with Charles Mingus, Betty Carter, Jackie McLean and Joe Henderson. But his name was most closely linked with three free-jazz pioneers: the saxophonist Albert Ayler, the pianist Cecil Taylor and, foremost, the saxophonist Ornette Coleman, who also hailed from Fort Worth.
After his brief but important stint with Mr. Coleman’s groundbreaking electric band, Prime Time, Mr. Jackson forged ahead with the Decoding Society in 1979. The group extended and streamlined the kinetic, boldly polyphonic style that Mr. Coleman had introduced while incorporating rhythms derived from ethnic styles.
“We’re coming from a world music as opposed to one kind of beat,” Mr. Jackson told The New York Times in 1982.
“Everything we do has a foundation, he continued in that article. “I think the African phrases are very obvious. I think the funk phrases are very obvious. I think the Oriental phrases are obvious. I think the Bulgarian rhythms are there — I hear all of it.”
Throughout the 1980s and ’90s, the band was a proving ground for veteran instrumentalists like the saxophonist Charles Brackeen and the violinist Billy Bang as well as promising newcomers. Two of Mr. Jackson’s protégés, the guitarist Vernon Reid (later of the rock band Living Colour) and the bassist Melvin Gibbs (who went on to play with the punk-rock vocalist Henry Rollins), performed with him sporadically through his final years.
Mr. Jackson was born in Fort Worth on Jan. 12, 1940. His mother, Ella Mae, played piano and organ at a Methodist church and his father, William, was the proprietor of Fort Worth’s only black-owned record store and jukebox supplier. The saxophonists King Curtis and David (Fathead) Newman were relatives; among the musicians who preceded him at I. M. Terrell High School were Mr. Coleman and the saxophonists Dewey Redman and Julius Hemphill. Mr. Jackson played his first public engagement, with the saxophonist James Clay, at age 15, then worked with Ray Charles’s band in Dallas. In 1966 he went to New York, where he enrolled at New York University. That year he made his first recording, with the Charles Tyler Ensemble, and joined Ayler’s band. His work with Ayler is documented on two roughly recorded but urgently played volumes of “Live at Slug’s Saloon.”
By 1967 Mr. Jackson’s career was derailed by drugs, he said in an interview published by Fort Worth Weekly in 2003. Introduced to Buddhism by the bassist Buster Williams in 1974, Mr. Jackson regained his health. A passing encounter with Mr. Coleman led to a four-year run with the newly formed Prime Time, which recorded the watershed album “Dancing in Your Head” and its successor, “Body Meta.” He joined Taylor’s band in 1978 and stayed for six months, appearing on four albums.
Mr. Jackson formed the Decoding Society in 1979, and it would occupy him for the rest of his career. Not just a showcase for his drumming, flute and schalmei (an archaic horn) the band also showed his increasing confidence as a composer. Albums like “Mandance” (1982), “Barbeque Dog” (1983) and “Decode Yourself” (1985) reaped critical acclaim. He seemed poised for a breakthrough.
He still found time for side projects. In 1986 he joined Last Exit, a blustering jazz-metal quartet with the saxophonist Peter Brötzmann, the guitarist Sonny Sharrock and the bassist Bill Laswell. Another venture with Mr. Laswell, SXL, brought the two together with the Indian violinist L. Shankar, the Senegalese percussionist Aiyb Dieng and the South Korean percussion troupe Samulnori. In 1987 Mr. Jackson joined Mr. Gibbs and the guitarist Bill Frisell in a trio, Power Tools, which made one album, “Strange Meeting.”
Commercial success eluded Mr. Jackson. But Decoding Society albums like “Red Warrior” (1990), a fiery guitar-oriented session, and “What Spirit Say” (1994), featuring the saxophonist James Carter, showed that he had never stopped evolving as a composer. “Shannon’s House,” his final studio recording as a leader, was issued in 1996.
In 2000 Mr. Jackson’s playing was curtailed by nerve injury in his left arm. By 2005 he had recovered sufficiently to play in the trumpeter Wadada Leo Smith’s Golden Quartet. Mr. Jackson played his final public concert with a new Decoding Society in July 2012 in Dallas, video clips of which were posted on YouTube.
Besides his son Talkeye, Mr. Jackson is survived by his wife, Natalie; two other sons, Gregory and Clifford; a daughter, Sunday; three grandchildren; and one great-grandson.
Publié par Jazz'à Junas Aucun commentaire: Liens vers cet article by Samuel Weinberg
Legendary and iconic bassist Dave Holland has a new record out, Prism (Dare2). In recent memory, Holland has spent much of his time devoted to his quintet, which has recorded prolifically and fostered a real improvisational rapport with complex compositional structures and a unique instrumentation of trombone, saxophone, vibraphone, bass and drums. Regardless of how great that band might be, it was with a healthy dose of delight that I received Holland’s new record, a decidedly different, horn-less, forward-thinking record featuring the much-in-demand, most excellent Craig Taborn on piano and Fender Rhodes, Holland-alum Kevin Eubanks on guitar, and the fantastic Eric Harland on drums. On listening to the first track of Prism, Eubanks’ “The Watcher”, one can hear that Holland was aiming for something quite different with this project and the result is complex, intriguing and oftentimes surprising. This band snakes through various sounds and approaches, and it captivates one with this aversion to constancy. I had the good fortune of talking to Mr. Holland about Prism, life, and his storied musical career.
Here’s a video of a recent performance by the band: 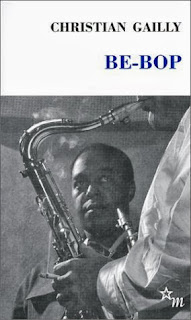 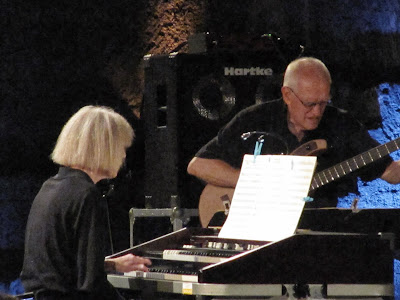 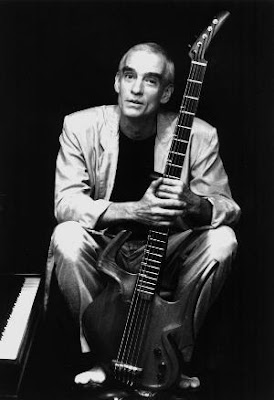 Birth name Steve Swallow
Born October 4, 1940 (age 68)
Origin Fair Lawn, New Jersey, U.S.
Genre(s) Jazz
Occupation(s) Double bassist, Electric bassist
Instrument(s) Double bass, Electric Bass
Associated acts Jimmy Giuffre, Art Farmer, Carla Bley, John Scofield,
Steve Swallow (born October 4, 1940) is a jazz bass guitarist and composer born in Fair Lawn, New Jersey.
As a child, Swallow studied piano and trumpet before turning to the double bass at age 14. While attending a prep school, he began trying his hand in jazz improvisation. In 1960 he left Yale, where he was studying composition, and settled in New York City, playing at the time in Jimmy Giuffre's trio along with Paul Bley. Since joining Art Farmer's quartet in 1964, Swallow began to write. It is in the 1960s that his long-term association with Gary Burton's various bands began.
In the early 1970s, Swallow switched exclusively to bass guitar, of which he prefers the 5-string variety. Along with Bob Cranshaw, Swallow was among the first jazz bassists to do so (with much encouragement from Roy Haynes, Swallow's favorite drummer). He plays with a pick (made of copper by Hotlicks), and his style involves intricate solos in the upper register; he was one of the early adopters of the high C string on a bass guitar.
In 1974-76 Swallow taught at the Berklee College of Music. It is often speculated that he had an influence on the contents of The Real Book, which includes a fair number of his early compositions. He later recorded an album of the same name, with the picture of a well-worn, coffee-stained Real Book on the cover.
In 1978 Swallow became an essential and constant member of Carla Bley's band. He toured extensively with John Scofield in the early 1980s, and had returned to this collaboration several times over the years.
Swallow had consistently won the electric bass category in Down Beat yearly polls, both Critics' and Readers', since the mid-80s. His compositions have been covered by, among others, Jim Hall (who recorded his very first tune, "Eiderdown"), Bill Evans, Chick Corea, Stan Getz and Gary Burton.
Quotations
"I believe it's written somewhere: 'Steve Swallow has to sit uneasily at the piano for ten hours before receiving his next idea,' so I sit there as patiently as possible. Eventually, an idea always comes..."
"Occasionally, when I run into a great bass backstage at a festival I'll play a few notes on the low E string, just to feel the instrument vibrate against my belly."