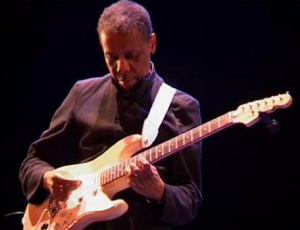 Dr. Martin Luther King, Jr On The Importance Of Jazz

On the Importance of Jazz 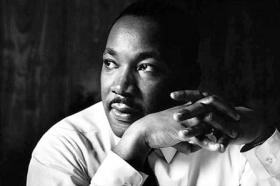 Enlarge image
Dr. Martin Luther King, Jr., Opening Address to the 1964 Berlin Jazz Festival:
God has wrought many things out of oppression. He has endowed his creatures with the capacity to create—and from this capacity has flowed the sweet songs of sorrow and joy that have allowed man to cope with his environment and many different situations.
Jazz speaks for life. The Blues tell the story of life's difficulties, and if you think for a moment, you will realize that they take the hardest realities of life and put them into music, only to come out with some new hope or sense of triumph.
This is triumphant music.
Modern jazz has continued in this tradition, singing the songs of a more complicated urban existence. When life itself offers no order and meaning, the musician creates an order and meaning from the sounds of the earth which flow through his instrument.
It is no wonder that so much of the search for identity among American Negroes was championed by Jazz musicians. Long before the modern essayists and scholars wrote of racial identity as a problem for a multiracial world, musicians were returning to their roots to affirm that which was stirring within their souls.
Much of the power of our Freedom Movement in the United States has come from this music. It has strengthened us with its sweet rhythms when courage began to fail. It has calmed us with its rich harmonies when spirits were down.
And now, Jazz is exported to the world. For in the particular struggle of the Negro in America there is something akin to the universal struggle of modern man. Everybody has the Blues. Everybody longs for meaning. Everybody needs to love and be loved. Everybody needs to clap hands and be happy. Everybody longs for faith.
In music, especially this broad category called Jazz, there is a stepping stone towards all of these. 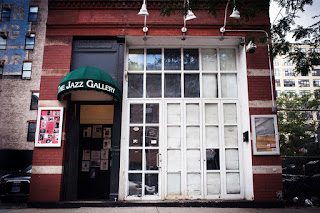 Jazz Gallery Gets a New Lease on Life

The Venerated Performance Space Picks Up Where It Left Off

On a Saturday night in mid-December, guitarist Adam Rogers called pianist Vijay Iyer to the stage of the Jazz Gallery, on Hudson Street. As the pianist made his way, Mr. Rogers recalled spots such as Studio RivBea and Soundscape, the loft spaces and clubs that, decades ago, helped nurture adventurous jazz and its audience in Manhattan. "Of all the venues in New York City," he told the audience, "the Jazz Gallery is the one that carries on that same vibe and purpose."


There was cause for reflection. This was the final performance in this second-story spot. The building had been rezoned, soon to house residential lofts. Paintings by Alix Delinois that lined the walls—it was an actual gallery, too, of jazz-related art—would be packed up, along with memorabilia from 17 years of activity.
Enlarge Image 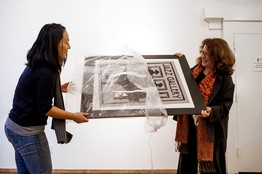 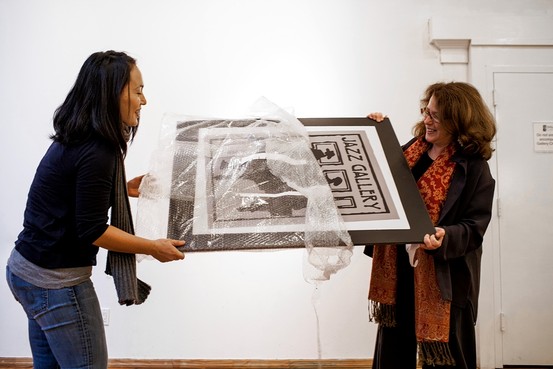 Rio Sakairi, left, and Deborah Steinglass unwrap a poster in the Jazz Gallery's new space on Broadway, in the Flatiron District.


Deconstructing the ballad "I Fall in Love Too Easily," Mr. Iyer marked the midpoint of a night featuring nearly two-dozen musicians with close ties to the venue. Some, like him, found early exposure here before achieving broader success. It's also true of pianist Jason Moran, saxophonist Miguel Zenón and drummer Dafnis Prieto, all three now MacArthur Foundation Fellows. Nine of the past 11 winners of the Thelonious Monk International Jazz Competition played the gallery prior to their victories.


As Mr. Iyer said later, "In the 14 years I've lived in New York, I can't imagine how my life would have unfolded without the Jazz Gallery. Improvisation is how we develop, change and become something new. The spontaneous musical offering on this last night was a kind of community ritual, expressing that simple truth."
The Jazz Gallery's staff had to improvise last year, not to help it become something new but to transplant its essence. Less than a week after that jam session, Deborah Steinglass, the gallery's executive director, announced a new home for the nonprofit organization.


One recent afternoon, sunlight streamed through the new gallery's skylight. "It's cozy, right?" Ms. Steinglass said. "Sort of looks and feels like the old spot." Beside her, Rio Sakairi, the director of programming for the past 13 years, described her aesthetic as simply "soulful" music.
"That's not a stylistic reference," Ms. Sakairi said. She's most interested in individualized statements from musicians. "I want the music to tell us who you are," she said.


Such artistic commitment often requires support beyond a simple gig. The gallery's longstanding commission and residency programs helped composer Darcy James Argue develop music that earned his Secret Society big band a Grammy nomination. For seven years, saxophonist Steve Coleman has led Monday-night improvisation workshops. Last year, the Woodshed, funded through an online Kickstarter campaign, made the gallery available during off hours as a rehearsal space.
The need to move, plus the challenges now common to all arts organizations, set off an ambitious development drive. The gallery has raised roughly one-quarter of the $250,000 target for its current "Home Run" campaign, and its long-term future is far from clear. It will share the new fifth-floor space with the Gallery Church (the similar names are coincidental). That agreement runs through February 2014, with hopes for a much longer stay, according to Ms. Steinglass.
Dale Fitzgerald, the Gallery's executive director until 2009, leased the original spot in 1995 as a rehearsal space for trumpeter Roy Hargrove. The two ended up founding a nonprofit venue. "My idea from the start was that jazz is an international and interdisciplinary language," Mr. Fitzgerald said. Michael Cummings's jazz-themed quilt hung near the front door. One photo exhibition displayed images of Havana as seen by Cuban and American photographers. The Gallery has especially showcased and nurtured New York's vital Afro-Latin presence. For saxophonist Yosvany Terry and Mr. Prieto, its "Jazz Cubano" series extended collaborative experiments the two began while students in Havana. "It was our new laboratory," Mr. Terry said, "in our new city."
At the new Jazz Gallery, a volunteer arranged chairs, leaving the customary narrow aisle for performers toward the stage. Ms. Steinglass said, "I want this to remain informal, without much separation between artist and audience."
Mr. Fitzgerald likes that the new spot hosts church services on Sundays. "I always did feel," he said, "like this place was built on faith."
A version of this article appeared January 16, 2013, on page A25 in the U.S. edition of The Wall Street Journal, with the headline: New Lease for Jazz Gallery.
Publié par Jazz'à Junas Aucun commentaire: Liens vers cet article

My friend, the late swiss jazz researcher Otto Flückiger, was a great fan of tenor saxophonist Arnett Cobb (1918–1989). So when Otto went on a trip through the USA in spring of 1980 he took the chance to visit Cobb in his hometown, Houston TX.

Arnett Cobb with Otto Flückiger in Cobb’s home, Houston TX, spring 1980.
Photo probably by Trudi Flückiger.
On that occasion Otto interviewed Cobb about his career,  playing with Frank Davis, going to Chicago with Milton Larkin to play at the Rhumboogie, joining Lionel Hampton, forming his own band and the auto accident that dramatically changed Cobb’s life. There are about 40 minutes from this interview on a C90 cassette tape which I found in Otto’s collection:

So I decided to digitize this – unpublished as far as I know – fantastic interview. I just edited out some longer passages of silence and some parts where the conversation is running in circles and into dead ends caused by translation problems. The female voice in the later parts of the interview is Trudi, Otto’s wife, who probably also took the photo of Cobb and Otto shown at the top.
I was always waiting to find the time to transcribe the interview, but I probably never will. So I am putting it up here for you all to hear and cherish yourself:

If you came here because you like Arnett Cobb. I got something more for you. First some nice photographs that Otto Flückiger took when Arnett Cobb appeared in Baden, Switzerland on May 4, 1974 (you can click to enlarge)

(Click to enlarge) Arnett Cobb at a concert in Baden, Switzerland, 1974.
Photos by Otto Flückiger
And here is some footage of Arnett Cobb featured with the Lionel Hampton Band in Nice, France in summer 1978.
Enjoy!