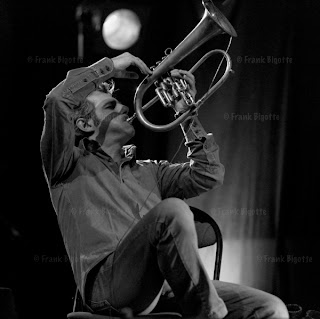 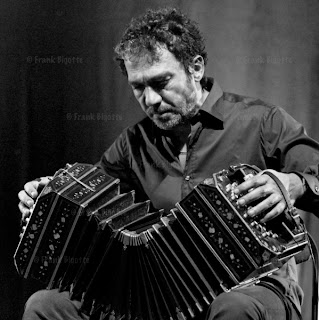 A jazz saxophonist sells his drafty farmhouse and finds a new place in upstate New York; there, he discovers the soul of his living room 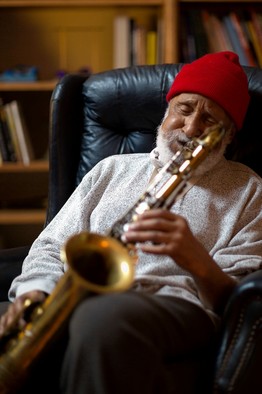 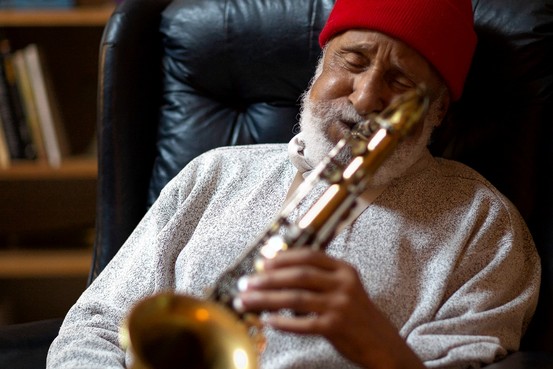 Ethan Hill/Redux for The Wall Street Journal
Saxophonist Sonny Rollins at his home in Woodstock, N.Y.
—Tenor saxophonist Sonny Rollins, 82, is recipient of the National Medal of Arts and a Grammy Lifetime Achievement Award. His songs "St. Thomas," "Oleo," "Doxy" and "Airegin" have become jazz standards. He is currently working on a new album, "Road Shows, Vol. 3," for release in 2014. He spoke with reporter Marc Myers.
I moved to Woodstock, N.Y., about four months ago for the heat. For the past 40 years I lived on the other side of the Hudson River in Germantown, N.Y., in a small farmhouse built in the late 1880s. My wife, Lucille, and I first moved up there from New York in 1972.
It was a two-hour drive, and we loved the quiet and privacy. We weren't really social people who hung out and went to parties and everything. After my wife died in 2004, I lived there alone.
Last year the farmhouse became physically uncomfortable for a guy my age. The staircase leading to the second floor was steep and dangerous—I fell there one time. The house also was drafty in the winter and spring. My feet get cold easily now and I needed to be warm, so it was time to move.
I told my musician friends about my plans, and they suggested Woodstock, where many of them live. [Drummer] Jack DeJohnette and his wife, Lydia, introduced me to some real-estate people who sold them their house, and they took me around.
Enlarge Image 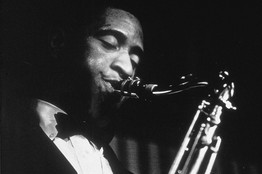 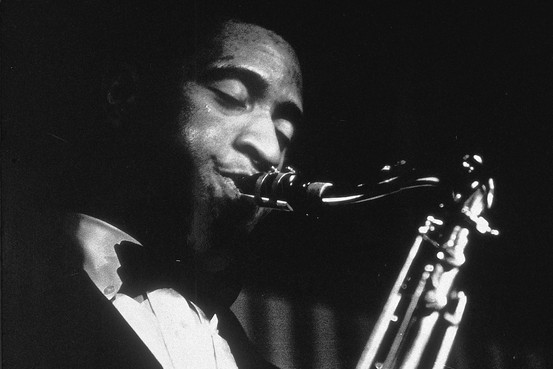 Bob Parent/Getty Images
Mr. Rollins performing in the 1950s.
When I first saw the house I ended up buying, I liked the entrance. There were no stairs to climb to reach the front door, and the staircase inside was wide and much safer. The interior reminded me of a lovely house I had stayed in some years back when I was touring in New Zealand.
Best of all, the central heating was fantastic. After I moved in last December, I kept the thermostat between 80 and 82 and installed a gas fireplace in the living room so I can make the space even warmer. I also soundproofed one of the bedrooms upstairs, expecting to practice there. I didn't want neighbors who were trying to sleep saying, "Oh, there's a guy nearby playing the saxophone." A couple of months later, when I didn't hear any complaints, I began practicing in my wood-paneled living room, which is a more welcoming space.
I used to be a ferocious practicer, but I can't physically do that anymore. These days, if I can practice two to three hours a day, that's great. I'll usually practice in the afternoon, starting at noon, or in the evening from 8 p.m. on.
Rooms have sound—a note, if you will. My living room is an E, and to a lesser degree an A-flat. When I play an E in there, it resonates more than any other note—filling the space and lingering in the air. E is a good note, but I'm an ecumenical guy. I have nothing against any of the notes. Sometimes they have stuff against us players.
What's important to me in the living room is the 12-foot alphorn that lies across the entire top of my bookcases. Friends in Switzerland sent it about 15 years ago. It's played on mountains there and gives me a nice feeling. It's different from a saxophone, of course, but it has a nice mellow, woody sound. It takes a lot of air to play, and you have to be careful. One time I was showing off—playing it for some guys—and I really got dizzy. You're supposed to play just long tones, and I was trying to do some silly stuff—playing it like my saxophone.
What I like most about my new house is that I'm left alone. Up here you're too far for people to drop by. I'm a very private person and I'm able to express that part of my desire as a human being here. Fortunately everyone in the area likes space and privacy, too. In Germantown, I had plenty of open sky and could see the stars at night. I also could see the Catskill Mountains across the river—where I live now in Woodstock. Now, with all the tall fir trees outside my new home, I can only see a patch of sky out my windows and a little bit of the moon. But that's OK.
When I go into town, there's always the risk of being recognized. That's not a bad thing. At the local health-food store recently, a guy came up to me and said, "Gee, you look just like Sonny Rollins. Are you?" I said, "Yes," and he said, "Wow." He was really overwhelmed. When people recognize me, it's humbling. There's an ego factor involved in being a performer, and in the music business, ego is something you have to nourish. But you also have to be careful about that. I'm very humble and genuinely touched when people approach me, but I never expect it. I was a fan of jazz musicians once, too, so I understand.
A house has a soul. I hope you don't think that's too strong a word. Its personality is shaped by its history. The personality of this house and my personality—we had to join and realize, well, we're going to be together for a while. That process is going on now. I'm getting used to the house—and it's getting used to me. It has been a comfortable relationship so far.
Article by Max Myers from Jazzwax
http://online.wsj.com/article/SB10001424127887323809304578430733765013790.html
Publié par Jazz'à Junas Aucun commentaire: Liens vers cet article 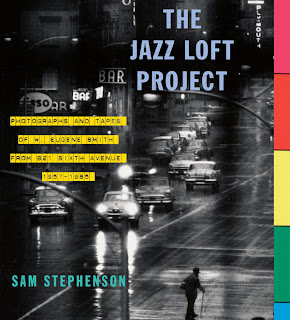 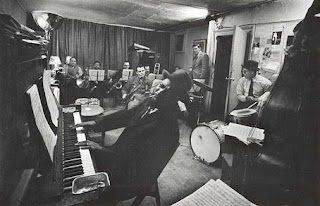 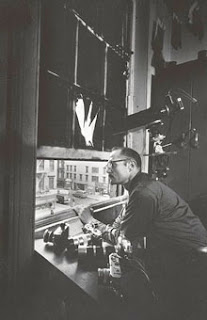 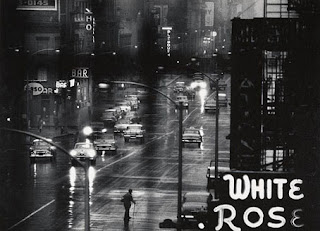 By
VICTOR L. SCHERMER,
Published: April 7, 2010
View All1234Next»
When, in 1997, writer, scholar, and archivist Sam Stephenson serendipitously came across audio tapes, photographs and other documents involving jazz musicians congregating in photographer W. Eugene Smith's Manhattan loft in the late 1950s and early 1960s, he was surprised as anyone. The wall of cartons had been unopened since before Smith's death in 1978. Stephenson and his cohorts spent several years studying the documents, including tapes in which one can hear jazz musicians conversing, brainstorming and playing in a relaxed, informal setting. Now, there is an exhibition of selected materials from these archives at the New York Public Library for the Performing Arts at Lincoln Center, as well as a book that contains a narrative of the project and some of Smith's multitude of photographs taken at or from the loft.

For photography enthusiasts, the value of this project is, of course, inestimable. Smith was one of the greatest of American photographers, legendary for his documentation of the Pacific campaign of World War II for Life Magazine, with whom he had severed ties before he moved from the ease of his home and family in Croton-on-Hudson, N.Y., to live in the dilapidated loft space at 821 Sixth Ave. in mid-Manhattan, in a building he promptly wired with microphones and recorders to capture all the sound that went along with the multitude of photographs that he was to take there for several years.
For jazz aficionados, the particular significance of The Jazz Loft Project is that it shows, in sound and pictures, a microcosm of the intensely creative jazz scene of the time, with luminaries and lesser-known musicians congregating, jamming and talking uninhibitedly before and after their gigs at the many nightclubs that sprung up in New York at that time. Three of the most frequent musical denizens of the loft were Thelonious Monk, his big band arranger Hall Overton, and legendary saxophonist Zoot Sims, joined at various times by Gerry Mulligan, Roy Haynes, Rahsaan Roland Kirk, Pee Wee Russell, Charles Mingus and a multitude of others. Much if not most of jazz is created in the off-stage moments and hours between performances, and The Jazz Loft Project offers an intimate glimpse into how the music comes about in the woodshedding process and the relationships that develop between the musicians.
Whatever his personal and artistic motives were, Smith anticipated the reality television shows and live Internet video websites of today, where cameras and microphones witness the everyday goings on of lives in progress. Such direct witness adds to and qualifies what people do onstage, and when this is applied to jazz musicians who, at that time especially, kept some distance from their public, something a little different—unexpected, even—can be seen that may change perceptions about the jazz scene
Chapter Index

Are There Mistakes In Jazz?

Listen to the Story

More From This Episode Enlarge image
"It's about being here in the moment, accepting one another and allowing creativity to flow." - Stefon Harris
Alan Klein/TED
Part 3 of the TED Radio Hour episode Making Mistakes.
About Stefon Harris' TEDTalk
What is a mistake? By going through examples with his improvisational jazz quartet, Stefon Harris gets to a profound truth: many actions are perceived as mistakes only because we don't react to them appropriately.
About Stefon Harris
Stefon Harris' passionate artistry, energetic stage presence and astonishing virtuosity have propelled him into the forefront of the current jazz scene. Widely recognized and lauded by both his peers and jazz critics, Harris is committed to exploring the rich potential of jazz composition and blazing trails on the vibraphone. He tours with his band Blackout and the San Francisco Jazz Collective, and he teaches at New York University. His TEDTalk was performed with Jamire Williams on drums, Burniss Travis on bass and Christian Sands on piano.